I made it to Campo Grande!

Well everyone, I made it to Campo Grande! The bus ride was sooo long! On my first bus we got stuck in construction and were at a dead stop on the highway for about two hours so when I finally got to Cuiaba I had missed my second bus, thankfully there was another elder with me and we were able to get the assistance there so they could buy me another bus ticket. I left cuiaba about 11:30 pm and arrived in Campo Grande about 10:00 am On my bus to campo grande I found out that a member was sitting right behind me so I felt alot safer! She offered to buy me breakfast. I'm so thankful that the lord looks out for us and keeps us safe.  In my new area I am in a suburb of the city called Coopharádio (coop-ah-hadio) and my companions name is Sister Chile. She is from Peru and has been on her mission for  7 months now. Shes a great missionary and a very sweet person, we're  getting along great! She also knows a lot of English and so we've made some goals to help her get better, shes planning on taking the English test at the end of her mission, Which I know she will pass because she speaks so well! So now she speaks three languages Spanish, Portuguese and English. She asked if I wanted to learn Spanish and I told her maybe a few things but that I was going to focus on Portuguese still so I can master it.  The ward here is fantastic and very organized I'm so grateful to be here and to have to opportunity to work with these members and people in this city. Campo Grande is WONDERFUL because it doesn't get above 85 degrees! and in the months of April and May they have´´Winter`` where it gets to be about 0 degrees C. I'm not sure what that is in Fahrenheit but it's pretty cold for Brazil. Sister Chile and I have had one baptism. His name is Douglas. He was an investigator of sister Chile and her last companion. He is great :) so  keep him in your prayers as he is making the transition to becoming a strong church member. We also have a few baptisms that we're hoping will come through in the next couple of weeks. I'm so excited to work here! It sure is different than Lucas, its not as organized and clean but I think I love it here even more (and I think that the weather has a lot to do with that, here it actually kind of feels like October and not July!) They celebrate Halloween here but I'm not really sure what they do, we'll have to see when it comes. I know its not the same as the United States. Well everyone, thank you so much for your prayers! I love you!
Love,
Shelby
Posted by AmieMarie at 11:03 AM No comments:

I'm only going to be able to send a mass email this week. I'm being transferred to Campo Grande. its a 24 hour trip on a bus :) whoohoo :) but its a nice bus so don't worry. I'm actually pretty excited to get to know another area. I love Lucas and I'm sad to be leaving but I'm excited for a new adventure. My companions name is Sister Chile and she is from Peru. 9 companions already! wow! I'm thankful for the companions that Ive already had and all that Ive learned from each one of them. Also those of you who are getting ready to send letters or packages or anything like that, wait just a little bit because you'll be sending it to a different office now. This mission is super big so its divided into two parts, the north and the south. The north has its own office and the south has its own office. So I will find out what the address is and send it to you. If you have already sent letters or packages.... all is lost. I'm just kidding :) they will make sure it gets to me, it just will take a little bit longer. Don't fret :) So I leave today at 1:00. I will probably be able to email more when I get to Campo Grande but I'm not sure, we will see. If not, I'm sorry its so short this week but at least there is always next week :) I love you all, thank you so much for the prayers and emails and thoughts :) miss you
Love, Shelby
Posted by AmieMarie at 9:05 AM No comments:

Well Sister Vilhena and I had a wonderful week :) It went by very fast! We had a few things happen that were pretty neat.
cool thing number one- A member who served here in Lucas on her mission gave us a refferal of a woman that she taught while she was serving her. She didnt remember her address but she remembered the street and said that it was a green wooden house. So we went to the street and guess what!? There were five green wooden houses, so we started a knockin. The woman of course lived in the last green wooden house on the street. We we clapped at her house she took one look at us and a huge smile spread accross her face and she said ``come in come in! wow its been so long since the sister missionaries have been in my house`` We talked to her for a little bit and she rememberes everything the missionaries ever taught her and she told us that she wanted to be baptised so we marked a date and shes going to be baptised this Satruday! whoohoo! She is super cool and funny. Her husband is very VERY catholic but hes ok with her being baptised ( so in all reality weve just got to work with him now :) ) Her husband is from Germany and she has two kids a girl Suellen who is three and a boy Gabrielle who is one.
cool thing number two-Sister vilhena and I were knocking doors one night and on one street we skipped a house because it was kind of rich looking. When we had finished knocking all the other houses I had a feeling to go back to that house so we did. When we knocked on the door a girl answered and told us to come right in before we even had the chance to say anything. but Sister Vilhena wouldnt go in at first becasue they had a pretty big dog (a chow) and she told me she wouldnt go into a house that had a bear for a pet. haha :) but they put the dog outside and we were able to go in. When we went in they talked to us like we were old friends (I love brazilians:)) and we were able to share a message with them that was very spritual :) we have an appointment to go back this week :) It was kind of cool becasue it was a grandma, a mom and a grandaughter it was cool to be an outsider looking in at their beautiful family. Im so greatful for this work and for this gospel and the chance that I have to share it with the people here.
Well im doing good here in Lucas. Im thinking that this next week I will probably be transfered to another city. I have been here in Lucas for about six months now so im thinking its time to move on but well have to see what happens. Ill keep yall updated :) Love you all and miss you! have a great week! Love Shelby
Posted by AmieMarie at 11:07 PM No comments:

Were doing well here in Lucas on this fine P-Day. It was a much needed day. This week has been crazy with the transfer, general conference, the sisters conference and also the sister Training leaders came and did divisions with us. The Sisters Conference was super fun, I got to see some of the other sisters that I haven't seen for a while, like Sister Kleinheinz and Sister Mendes. Then we got to listen to the sister training leaders for a little while. After we all went to lunch in a restaurant (sorry if I'm spelling things wrong, right now I don't speak English or Portuguese, I know, its awkward) I'm loving my new companion, she is from Portugal and is super sweet and humble. Its kind of nice to be with someone with a more calm type of personality. We are getting ready for the baptism of 9 year old Rayane (high-anie) she is super excited to be baptised. She is so smart and each time that we go and teach her she gives us a mini lesson on what she has been studying in the book of Mormon and pamphlets we have given her. He mom doesn't want to be baptized but she said that Rayane can be baptised :) yay! This week we also taught one of our investigators about the plan of salvation. She had a lot of questions, which sometimes is intimidating because sometimes you don't know how to answer the questions that they have but I said a little prayer and I was able to answer all of her questions and at the end she cried and said that she felt so relieved and she said she knew that the plan of salvation really is the plan that God has created for us. I'm so thankful that I get to share these things with other people and watch it change their lives. I know this church is true. I love my savior and I know that through him I can be happy so can everyone else. I love you all and am so grateful for the prayers in my behalf.
Love,
Shelby

Posted by AmieMarie at 2:57 PM No comments:

Shelby with all the sister missionary's in her area. 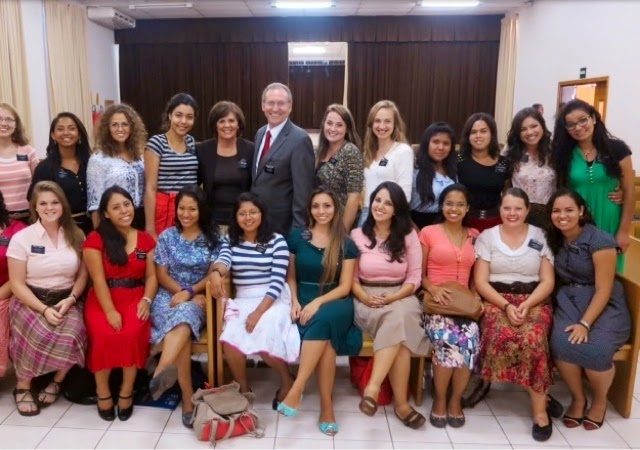 Posted by AmieMarie at 10:17 PM No comments: